What Is User Acquisition? 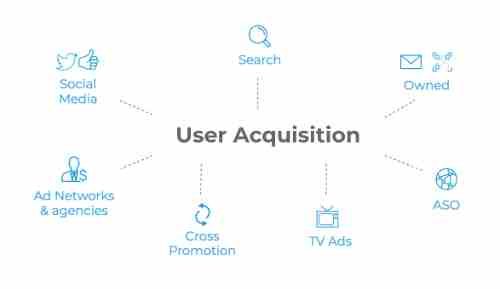 User acquisition is the act of using data-driven, mobile ad campaigns. It is used for promoting apps, services, and platforms as well as to capture new users. User acquisition campaigns are different from traditional advertising, which nurtures leads at different stages. They convert right away.

Many app developers focus on social media channels in their user acquisition strategies. The tools that are native to Facebook or Google App Campaign can automate many aspects of a user acquisition campaign.

How does user acquisition actually work?

A user acquisition program is a continuous loop of data analysis as well as creative ideation and testing. Though no two advertisers’ strategies will be the same, all follow the basic steps.

First, you need to find prospects that are most likely and likely to convert. They could include current customers or users of comparable market offerings. Prospects may be within a defined geographical area or anywhere worldwide. Or they could be Android or iOS users. Additionally, they may meet certain criteria, such as the amount they’ve spent in a program/app, the actions taken or milestones reached in the past 24 hours, or for the entire time.

User acquisition efforts should, in general, target those users who are active and have reached certain milestones. This means they are more invested in a program/app and are also among the highest-value purchasers.

Next comes the creation of custom and similar audiences. They should be based on a combination of accurate data points, data intervals (eg 10% higher), and quality. Cross-selling measures use custom audiences. Similar audiences are people who use similar apps or programs and meet certain spending or activity thresholds.

The total number and types of custom audiences and lookalike audiences differ from the campaign. Advertisers can use hundreds or thousands of audiences to test and refine creative ideas. The success of a campaign depends on the way these audiences are defined.

Once target audiences are defined, it’s now time to distribute high-quality creativity across selected ad channels and types. While the majority of ads (roughly 19 of 20) won’t achieve user acquisition campaign goals due to their low quality, one ad can deliver huge gains.

Adverts can maximize their advertising spend with quantitative creative testing. This is a systematic method that reveals which ads have won and why. It allows them to stick with the concepts that work while also testing simple variations (colors/photos, layouts, etc.). Quantitative testing is vital for maintaining campaigns fresh and driving user volume growth.

Why is it important to acquire mobile users?

There are over 2.7 billion smartphones in use worldwide, and more than 1.35 billion tablets. Users spend an average of three hours per day on social media, checking out new apps and checking out updates. Mobile user acquisition campaigns are unique because they reach consumers at their point of need in the digital world they’ve created.

It Converts With Ease

Social media platforms allow advertisers to access a vast amount of user data which allows them to target extremely precisely. The process of downloading an app to a mobile device from the consumer’s standpoint is very simple. A quick uninstall is possible with little to no effort. Mobile user acquisition campaigns are easier to achieve and offer an immediate payoff.

The cost per installation (CPI), which is the most basic customer acquisition cost (CAC), of a mobile user-acquisition campaign, is significantly cheaper than the cost to acquire new customers through other advertising channels. Recent industry changes have lowered the costs of mobile advertisers.

Facebook and Google App Campaigns launched machine-learning algorithms in 2018 that could automate basic user acquisition campaign functions. This was a significant advantage for user acquisition directors. With fewer advertising dollars, advertisers of small, medium, and large sizes can not only spend more time on creative development and test, but they can increase app installs as well as profits.

Another big advantage in mobile user acquisition: detailed, detailed visibility into the users’ app activity. Advertisers don’t have to limit their user volume. They can also gauge the quality and worth of users. This allows them to adjust campaigns and shift advertising budgets to platforms that attract more active, high-purchasing users.

What are the main challenges in mobile user acquisition?

To pull off a successful mobile campaign, you need to have the right amount of flexibility, bandwidth, expertise, and agility. A strong creative partner is a great asset for advertisers. They can also be an extension of their user acquisition campaign management staff.

Every new mobile application that goes to market must compete against thousands of other options of varying quality — out of millions available apps across Google and Amazon app shops. It’s difficult enough to make an app stand out in this environment. However, one bad review in the store could spell doom.

App developers cannot afford to rest due to the constant development of new devices, changing preferences, and user preferences. A state-of-the-art app might become outdated by the time it launches. The same applies to user acquisition best practices. These practices could have been successful six months ago, but they might be costly mistakes today.

In many forms of advertising, repetition is key to success. In mobile user acquisition campaigns, repetition can be detrimental to both the ad’s performance and the budgets of advertisers. Users will tune out ads they’ve seen too many. Usually, this happens within days of the ad’s launch.

Advertisers should be the ability to test and generate new ads frequently to combat creative fatigue. But small and medium-sized firms were historically at an advantage on this front. They were unable to access high-quality creative services. Tiered managed service (introduced January 2019), has removed barriers by lowering costs for creative services at scale.

Each channel of user acquisition has its unique advantages and challenges. They also have different expectations. These factors should be taken into consideration when planning UA campaigns.

Sun Basket, a subscription-based meal delivery service, began its user acquisition campaigns on Facebook and Instagram. The campaign had specific growth goals and costs per acquired customer (CAC) and was launched with weekly goals. It was able to raise its subscriber base by 447%. Sun Basket used hundreds of original images, videos, and real-time data analytics to achieve this. It also increased its monthly purchase volume by 546% (well above its original goal). And it was able to reduce CAC by 42 percent.

AutoGravity, a financing company for car loans, had three major objectives when it launched its user acquisition campaign. These were to reduce its mobile application install cost, decrease its cost per applicant and increase the volume of Facebook advertising. Over 30 targeted and similar audiences were shown mobile app installation ads on Instagram and Facebook. They contained over 175 photos, 15 carousels (videos), 12 videos, and many other ad variations. The campaign increased customer applications by 62% and reduced the company’s CPI (41%).

PlayStudios, a casual gaming developer, had big plans and high hopes regarding its MyVegas Slots & Konami Slots games. An Instagram and Facebook UA campaign proved to be a success. PlayStudios achieved a 12.2% increase on ROAS, a 46% drop of CPI, and an impressive 268% increase for installs.

How to Run a User Acquisition Campaign

User acquisition campaigns are complex, fast-moving, and difficult. Marketing teams cannot do it all internally. They need the right tools, expert benchmarking, and the ability to do it all. This will ensure that efficiency and growth are sustained in a strong, sustainable manner.

1 thought on “What Is User Acquisition?”